We've had a couple SUPER busy weeks for some reason. Perhaps this is just our season for busy-ness (not talking about holidays but about life with kids, callings and friends). Here's the camera's proof that we had time to breathe:
David and Catherine came over to play while their mom went to get some dental work done. Michael and David are 5.5 weeks apart (if you ask Naomi she typically says 6, if you ask me I typically say 5......thats because we're both right depending on which way your round. ha ha ha.). David is older. They are both big fella's at this point and had a lot of fun sharing a piece of play corn. 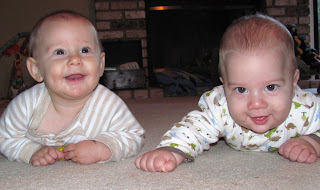 I love this shot of penny's ragamuffin hair. It is such a pretty picture to me. She as watching Wonderpets. 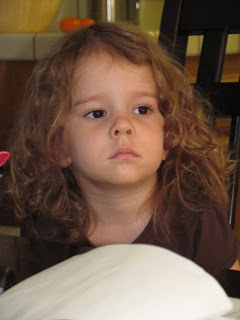 Sometimes she watches TV upside down. Seriously. I died laughing when I turned the corner. 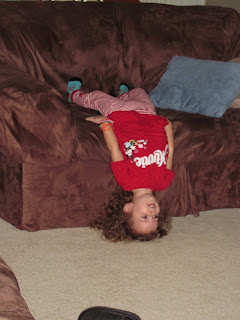 This is probably the most detailed painting that she's ever done. She told me what each thing was as she painted it. The only thing I didn't label was the "red thing." I painted that.
Dominic said, "Thats a really nice mushroom mom. You did a good job painting it."
To which I replied, "thanks Dominic, thats really sweet of you. However, it was an umbrella."
Dominic.... "Oh, it doesn't look like an umbrella."
So much for those two semesters of art in college (I can paint people really well). 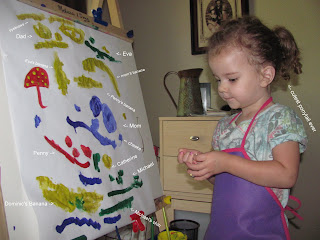 This picture has double duty. WE FINALLY TIE-DYED SHIRTS! Didn't Dominic's turn out great? I've been super intimidated to do this, but it was so easy. I purchased the kit at Michael's (coupon makes them fairly inexpensive, around $5) and it came with 3 colors and all the supplies needed. We were able to dye 4 shirts and next time, I think we could even do 6 or 7 now that I know what I'm doing.
So, I saved a flier from last year about a rock and gem show. The date finally came and I'm so glad I took Dominic (and a friend of his). They had so.much.fun. There were tons of activities for them to do and we came home with quite a few cool rocks. Dominic is still in love with rocks, who knows....maybe he's my budding geologist. Best of all, most of the activities were free. 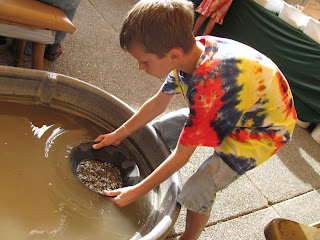 He's getting so big. Can you believe he's a 3rd grader? 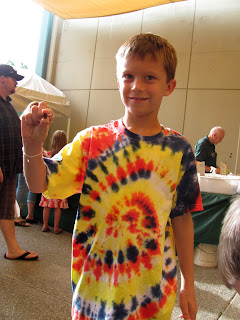 Dominic and Penny helped me feed Michael. He is such a good eater. Towards the end of the day, around dinnertime-ish, Michael eats just over 1 cup of food. I've been mixing a bunch of rice cereal with 1/2 a jar of baby food (so far just veggies). He loves it, all of it. It doesn't matter what it is that I feed him, he completely loves it.
He recognizes the bowl when I get it out and the sign for food. I can tell because he goes crazy moving his hands and panicking for something to eat. We're also working on the sign for milk. 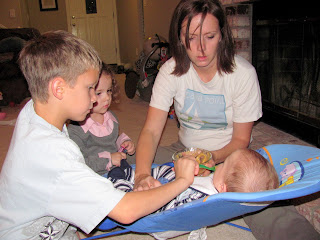 I love the squish on this boy. I can smell him in this picture, he smells sooooo good. Both Penny and Dominic will smell on him and exclaim how good he smells. 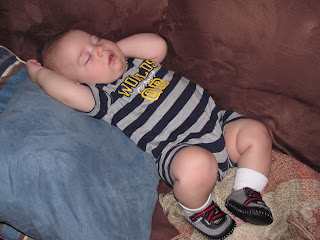 There. We're alive and breathing and having a great week. Dominic's teacher on Monday sent me an e-mail that said:
"I just wanted you to know that Dominic was “at the top of his game” today. He was paying attention, doing his best, finishing work accurately, and asking to help or do Independent Math when he was done early. It was a great day!"
I was so proud of him! He's been struggling with starting work before the direction has been completely given and then doing things incorrectly or not knowing what to do because he missed direction (its the curse of being in the top of the class...sometimes you think you're too smart). Dominic is so good about taking those things I ask him to work on to heart and putting forth his best effort. Since I'm not there to monitor that, I was so happy to hear that an effort is in fact being made on his part AND being noticed on theirs. =) Way to be Dominic!
Posted by Katie at 11:02 PM

I LOVE that picture of Penny upside down.

I love the picture of Penny upside down as well... how long can she sit like that? I think I'd get a headache. :) I also love the squishy-Michael picture. What cute shoes!!! :)

We really need to live closer, I look at these pictures and just want to hang out with you guys and love on your cute kiddos!