Last month at pack meeting, Dominic earned his Bobcat. He was in Alaska all summer and didn't get it quite finished while he was there, so we quickly fulfilled all the requirements and he earned it! I was so proud of him. I was only sad that it was a swimming party (well not really, because it was lots of fun) because that meant that he wasn't wearing his whole scout uniform getup for his first set of awards. Thats okay.

They had the Pack meeting at an AMAZING house from someone in the ward that we combine with. It was beautiful and the pool was more than big enough for all the people that were there. Sean was a sport and swam with Penny while I sat and chatted with the ladies in the shade. 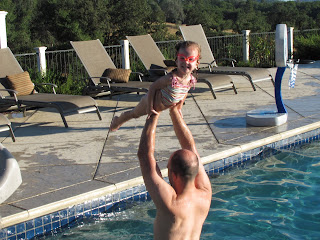 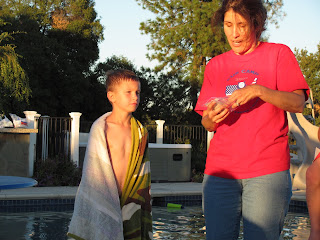 Pinning mom with the bobcat pin. 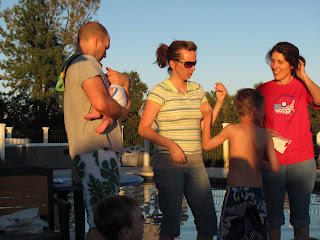 Good job Dominic. I'm so glad that you love scouts and am having so much fun with you doing it. 8 really IS great isn't it? 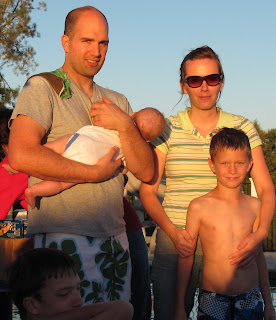 No, not the Carters. It was a family in Placerville ward.....8 kids. Last name, Sellers. Huuuuuuuuuuge house. so beautiful and they share it like its a community center. Open swim on Tuesday nights.....such neat people.