So Michael has been sleeping through the night now. Its so nice. I get good sleep. He goes down around 8/9pm and doesn't usually wake up to nurse until 6/7ish and then goes back to bed after he eats until around 8/9 or so.

I'd say I'm making less milk because he's sleeping longer and cut out that one feeding at night BUT I've stayed up and pumped the last few nights because Sean and I have a date on Saturday and we're leaving him with a babysitter......so I don't know what the deal-y-o is. 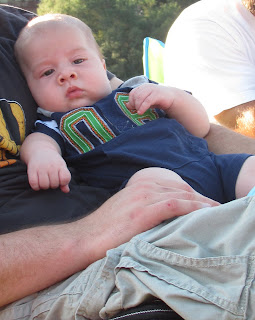 He had his 2 month appointment earlier this week and he weighed 14 pounds 13 ounces. I don't remember how long they said he was, but it was in the 90th percentile (his weight was in the 97th percentile). 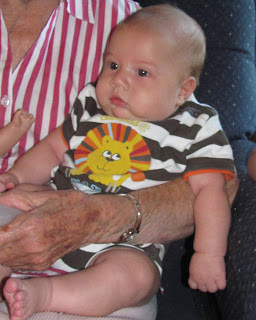 Rachel, too. Lately she's nursed me dry then fusses for more, so I started her on cereal and applesauce. She loves it. She's been waiting for it...

I just can't figure out why she's gaining and I'm not losing!! You look great, by the way. : )

He is so squishy! I love it. "Nurse me skinny!" Haha, I'll have to make that my mantra next time around, it must be working for you because every week I see you you've lost more inches!