Dominic started flag football. The teams were supposed to be 2nd and 3rd graders, but they didn't get enough kids to sign up so they added 4th graders in the loop. Needless to say, Dominic is the youngest kid on his team, most of them are 4th graders. Good thing its flag football and not full on tackle.

Game is about to start:
Dominic's team is in black, they are the Raptors. He has on blue shorts without white stripes. 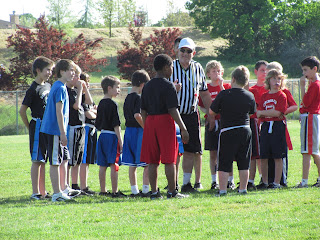 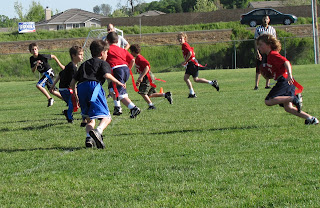 They all have to wear mouth guards. Dominic thought this was pretty darn cool.
He wore it for probably a few hours after we got home too. 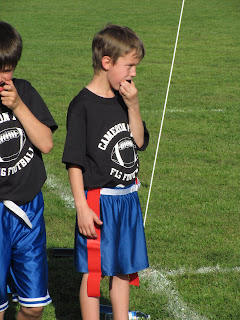 It was a beautiful evening in the mid 70's 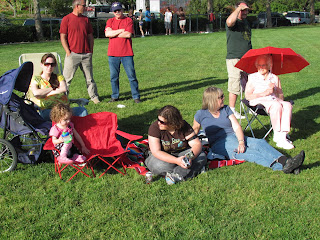 Playing with those flags on the sideline. 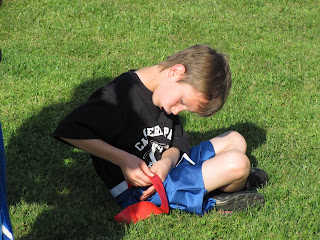 Dominic's team won in sudden death overtime. Dominic really has no clue what is going on in the game, but with practice, he'll get there. 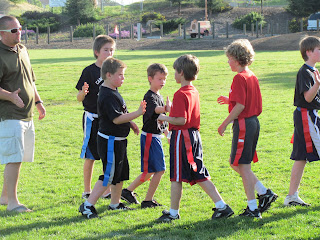 Thats 56 pounds of a tough football player right there. 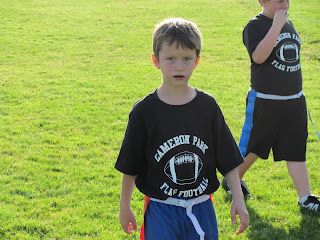 Watching from the sideline. She was his biggest cheering section! 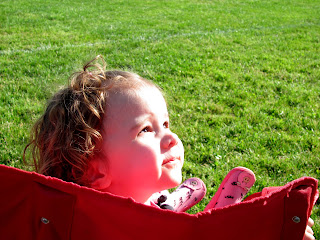 Random short video of the second play of the game.
Posted by Katie at 10:45 AM

you know in boxing they get to wear mouthguards too, he should try that next, also the rules aren't as complex as football.

he's such a fun kid!

They must have had the same thing happen with Hayden's soccer team, because it is mostly 6 year olds. he and two other boys are the only 4 years olds on the "prek" team. haha

I am working on getting you back your DVD's! Sorry I'm taking so long. I watched the 1st two, and loved them but just haven't been able to find time to watch the other two. Arg. I'm thinking I will dedicate nap time to them today. Thanks so much. I will hurry and try to get them back to you!

Blake would be soooo jealous! He probably asks me weekly when he can play and there just aren't any opportunities around here until they are in 3rd grade :(