We missed this stuff

I forgot to blog a few things from a week or so ago. So here goes,

Penny has created these THINGS she calls "bitsies." This was the day they started. These are her bitsies. She made them all on her own. However, after this day, she talks about her bitsies all the time. She is scared of the bitsies. She says things often like,

If you ask her what a bitsie is, she says its her baby moosie (a moose puppet she got for her birthday). But if you talk to her about the baby moosie, its neither scary nor big or at all what she describes a bitsie to be. We're completely confused about it and I only hope that she can hold on to this BITSIE phase long enough so that someday she can explain to us what a Bitsie really is.

Meanwhile, I love the curls sneaking out of the hat that she loves. 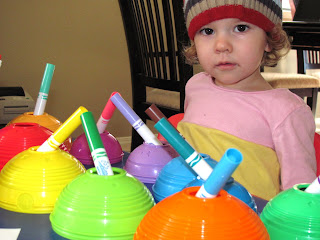 There is this great place about 40 minutes from us called Wacky Tacky (its in Roseville). It has a great indoor jungle gym and foam ball pit that out-shines any other place we've been for this kind of play. Dad had a day off and so did Dominic, so we trudged down there with some friends and made an afternoon of it. We had lots of fun....though, my belly got in the way and I huffed and puffed my way around. 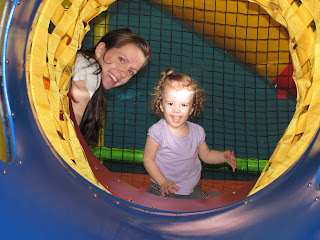 The slide actually goes fast....can't you tell by my face? Dominic actually worked up a sweat...which is hard for him to do, he doesn't sweat a lot. But he and his friend Indy were running around EVERYWHERE. It was a fun day. 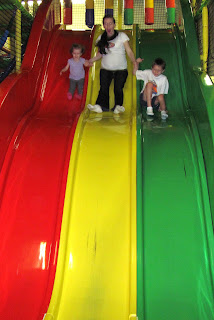 Sean seems to be getting left out of the posts. Here's a handsome shot of our designated driver last Monday. We drove to the Bay Area for a funeral service (good LDS family friend of Sean's) and Sean was so wonderful to drive both ways while the kids and I took naps. =) 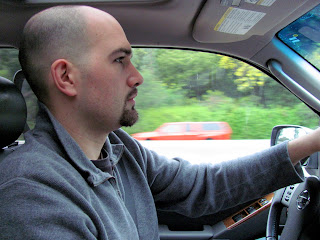 Parker talks about "shadows" like Penny talks about bitsies. It kinda freaks me out. He tells me that if he screams in his room (which he does a lot) that they come out. He says there are nice ones and mean ones.
Hayden went through a phase where he talked about a "bor", it was everywhere and was scary to him. That didn't last very long though. Parker has been talking about shadows for over 6 months.
It's probably just their imaginations running wild, but who knows.

Maybe they are like the itsy BITSY spider??! It could be an adjective turned noun that means anything unpleasant (like a spider). Interesting! Brenna went through a phase a while ago where she was really concerned about monsters- everywhere. It's funny the things kids get in their heads.

That slide looks awesome!! You're such a good mom- not letting a pregnant belly get in your way of having fun WITH your kids! :o) Good job mama!

I think I would be more freaked out by the use of the word shadow than bitsie....eeek!

and no, its not the itsy bitsy spider...... thats the only thing we could think of that made sense too....but she said no, it was a baby moosie. lol....I don't know.

Dominic planted the idea of Ghosts in Penny's mind a few weeks back. Not in a 'trying to scare her' kind of way, but in a playful "Oh no, there's a ghost" kind of way. But she was actually scared of them. He stopped when I pointed out to him what it was doing.