I do a swap with my friend Suzy so that she and I can go in to our sons' 2nd grade classrooms and help out once a week. So once a week she watches Penny while I go in..... and then I watch Addie once a week so she can do the same. Our 2nd graders go to different schools now, but it still works just fine for us.

Today was our turn to have Addie over. They play VERY WELL together and rarely argue over toys....which is really a rare thing at this age. It was hilarious to see them interact especially today for some reason. Penny had some serious energy and was very intense the whole time (see video coming soon below).

It was also nice enough to play outside so we busted out the tricycle and the scooter today too. The tricycle has a little storage bin in the back and Penny and Addie made sure to fill it with tons of lava rocks from the yard (have I ever mentioned how much I hate lava rocks)? It was pretty heavy when they were done.

Thanks for a great afternoon Addie! 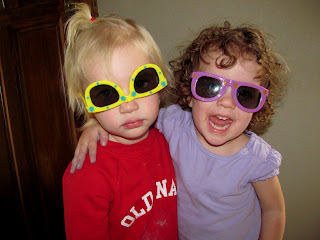 This video was just after we had finished a gymnastics class just 30 minutes earlier. She has learned to jump finally (she is a little vertically challenged) and gets excited when she actually does it.......so do I though.
Posted by Katie at 8:01 PM

Wow, that was a big one. How great and entertaining is this age. I think she's just a little younger then star. His old is she? Have I mentioned I love love love her curls.

SO CUTE!! Addy squealed when she saw this...How fun to post the same day. She had a great time. THANKS! See ya Wed. They do play very well together. Cross our fingers they don't figure out the fighting over toys!Addy LOVES Penny like a sister!

She is hilarious, and SO cute.