Penny got some bottles and sippy cups that someone didn't want anymore and LOVES THEM (understatement). She's so excited for the baby to come, though I don't think she understands how it will change our lives as we know them now. I'm not worried though, she's such a mother hen that I'm pretty sure she'll adjust just fine!

I love her 'gentle touch' in this picture. She's completely engulfed in feeding her baby and thats it. =) 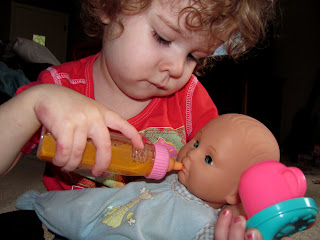 Penny and Daddy were hiding under that table and Dominic popped in just for the photo opp....I LOVE his smile in this picture and the adoring, "my brother is so silly" look that Penny is giving him. Sean squished under the table is pretty priceless too. =) Aaaahhhh, the memories we are making. =) 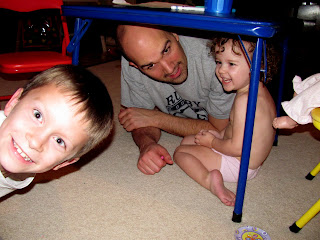 Penny figured out how to draw a big circle and was all excited about it. She told me to come look. She got a big "Wow, Penny. That is so great! You did it! You made a circle!" She was so proud of herself. Then I gave her the idea to draw a happy face inside the circle and she went at it with much concentration. She was so proud to have drawn a "WHOLE HAPPY FACE."

We left it up all day and first thing when Daddy came home, she remembered to show him. ...thats how proud she was. 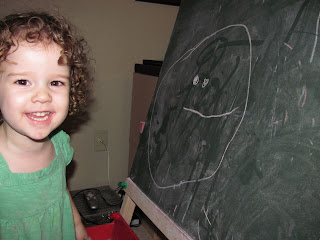 She has been LOVING (another understatement) her gymnastics class. Its really brought out some great qualities in Penny over the last month-and-a-half that we've been attending. To name a few:

-She will try something new when asked by her teacher instead of shy away and run to mommy embarrassed that someone is talking to her.
- She learned to JUMP! Even if only a few inches, hey...we'll take it
- She's great at waiting her turn
- Ta-Da!
- Sense of accomplishment shooting through the roof. I hear so many "I did it Mom!" 's that it makes me smile.

I wasn't sure if I wanted to put her in Gymnastics. It didn't seem like a need to me,....and I don't think it is still (meaning I still see it as a luxury and not a NECESSITY for a child)....and just one more thing to add into our schedule.... but its been so much fun that I don't regret it one bit. 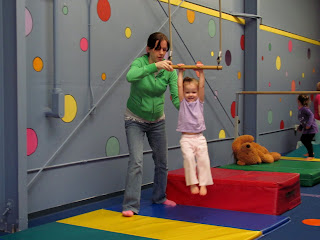 That's funny- I was just telling Forrest last night that in a little less than three weeks my whole world is going to change. You think you can anticipate it, but you really can't. The postpartum period is always a struggle for me. However, I also learn something new each time, so I guess it's really a blessing in disguise. I bet Penny will do just fine. Regardless, we'll all be in the same boat, and that is of some comfort.

Look at your cute belly. Yeah penny. She will be great with the new baby. I was worried about star cuz she was the baby, and very spoiled, but she is a fabulous big sister. She's always watching out for her little brother. How exciting.

She looks so proud in that last picture. :)
We have had our kids in a "tumbling" type class off and on over the last year, and I totally agree about it bringing out great qualities in them. Hayden's confidence and independance improved SO much.

I love Dominic sneaking in the picture! Hahaha. What a great shot. It's been great to watch penny in tumble time. I love watching her jump! She's totally getting it.