Dominic wrestled in the last tournament of the season today and got second place and came home with an awesome silver medal. We were very proud of him.

His matches were as follows: 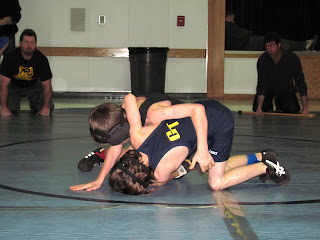 When asked what his favorite thing about wrestling this years was he said:

"that I won a silver medal! I'm very proud of myself for being a good wrestler. My favorite parts of practicing were learning new wrestling moves. I do not like running for 10 minutes. I loved putting away the wrestling mats and rolling them up and pushing them outside to put them away. Sometimes I got to ride on them." 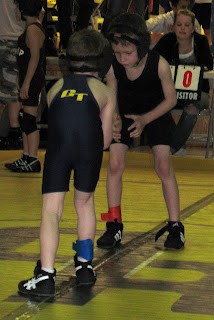 He weighed in at a whopping 53.7 pounds. 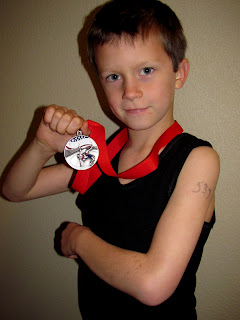 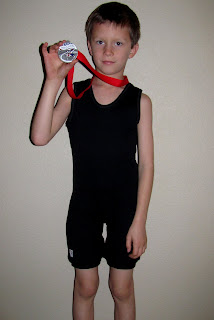 We were so proud of Dominic! I recorded all his matches today since Sean didn't get to be there and we watched them on the TV after dinner. Sean's eyes got a little misty watching him. He was so proud of his little guy and how well he applied everything he learned this year. We're excited for next year.

After wrestling today, Dominic had tennis practice. One of the local gyms here does a free 1.5 hour class every Saturday for all kids elementary through high school. Dominic has been really enjoying Tennis.....a sport I probably wouldn't bother seeking out but have really enjoyed watching him learn. He's getting pretty good and could probably kick my trash at it.
Posted by Sean at 7:59 PM

Way to go Dominator! You are amazing!

So cute! Glad Dominic was there to keep Brandon company all day long. I gotta say, I'm a little glad wrestling season is coming to an end so I have my hubby back.

I would LOVE to have Brady take that tennis class. You'll have to give me details later. Tennis is my sport. :)

WOW, dominic! good for you! i want to see the videos also. maybe you could bring it along when you come up.

How neat! Congratulations Dominic! I thought his little speech about what he liked this year was really great, and cute :)