Well, should be pretty obvious from this picture....even Dominic was able to guess.
A few days earlier I was at my doctors appointment and we listened to the heartbeat. It was 164 and she immediately said, "my guess is its a girl based on the heartbeat. Yep, a girl." Dominic really wanted a boy and Penny keeps saying its a boy and I thought I didn't care either way, but as soon as the doctor said that...I felt this twang of "darn, I kinda wanted a boy." So, I was elated when the ultrasound tech told us that Dominic and Penny were going to have another brother. =) We are excited. 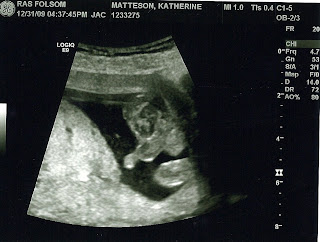 He smiled really big just before she took this picture. 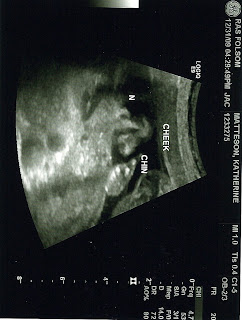 and his profile. We also got a good picture of his arm and it looked like he had muscles to which Dominic said, "What? How does that happen? He has bigger muscles than me!" OH, we love you Dominic. 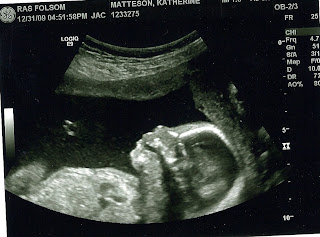 We haven't found THE name yet....throw out some ideas if you wish.

those are great pictures. I love the one with his face. exciting!
I have no ideas for names. Micah and Ammon always like Bob. he he

I always wanted to name my kid Micah, but I guess that won't work.

Congrats!!! That's exciting! I can't think of any good names... good luck with that one! :o)

Little boys have a special place in their mama's hearts. I am glad you got your preference. As far as names, I always like to choose scriptural names for my boys. If this baby was going to be a boy, Forrest and I were thinking of Joseph. It's scriptural, versatile, and strong. No matter what name you choose, the baby will grow into it and you'll come to love it.

That's my birthday! :) Glad HE is healthy and good luck!

sean, you can have micah's middle name.....Moroni! it's practically the same thing.

Hurray! I think a little boy would be fun! We can't wait to meet him.

i like the name teague, and im only telling you so you DON'T use it.
if i think of anything more productive i will let you know :)

Don't worry Rose, definitely not using that one.

Congrats Katie! I was looking at this post with the boys and they laughed at seeing his manhood! Oh what you have to look forward to with two boys!