Dominic loves to eat with chop sticks. Anything he can, he tries to (I'm thinking about getting him a reusable set that we can put in the dishwasher for his birthday. That's how big of a fun obsession it is). Penny doesn't usually like stir-fry...but this time, since I gave her chop-sticks (she dropped one) she ate it all up. Guess you just need the right kind of fun, not the right kind of food, to get them to eat. 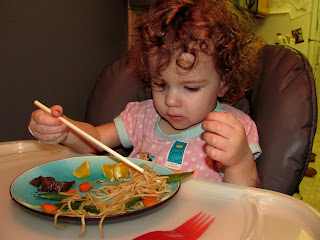 The next night we went to a Korean all-you-can-eat place for a friend of Sean's birthday. It was scrumptious. We had to cook all our meats in the middle of the table on a grill......all the meat was pre-seasoned to perfection. Penny and Dominic were excited to use chop-sticks again...I don't mind them, but they didn't have another option which meant I had to help Penny eat her food and I couldn't eat mine fast enough! 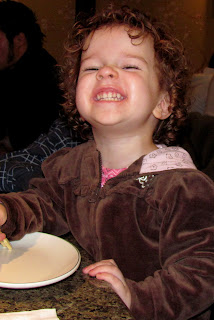 Friday night Dominic had a few friends over to watch a movie. Penny had to sit with the boys on the beanbag under the "soft and cozy" blanket RIGHT NEXT to her brother. Dominic is pretty good about letting her invade all of his personal space, even in front of his friends. If you haven't seen G-Force yet, it was pretty funny. 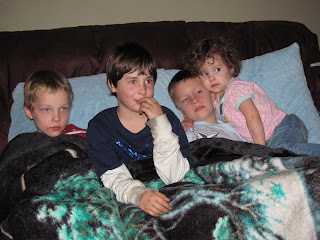 Cupcakes at the restaurant. Our brown eyed girl. 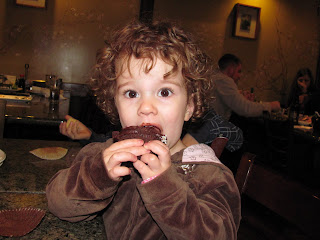 Our blue eyed boy! His face is growing up so much! 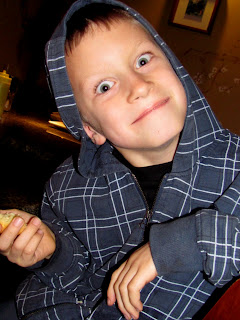 Penny was in the kitchen for a few minutes and then came out and asked.... "Mommy, where did my markers go?" I died laughing. Hiding them under her hat? what a goof.

These are her SOFT AND COZY pants and are her absolute favorite. Since I don't do laundry everyday (I know...I'm a horrible mom right?) she can't wear them everyday. I just went back to Old Navy today to see if I could buy stock in them....but they were all out. I think I may have to actually MAKE her some polar fleece pants, she loves them that much. Time to bust out the old patterns! 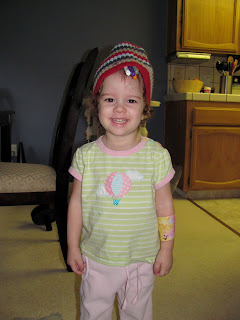 She loves to play with rice and beans....pour, spill, measure, cook, stir, carry, shake.....LOVES IT. Dominic used to be entertained by this for 30-60 minutes at a time...Penny is the same way. Rarely does she get them off the mat. =) I've banned Dominic from playing with these anymore...he gets too creative and I find them all over! 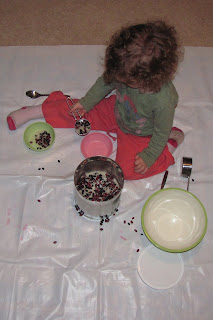 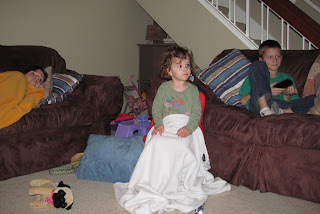 I love those kinds of weekends. So I am curious, which restaurant did you go to? We love Mongolian Grill and Benihana's, and the place you went to sounds similar. I'd like to try it out.

i want to come play at your house! ask dominic if he will snuggle with grandma! haha.

So are you in your own house now? I'm out of the loop.

Yes, we moved in the beginning of August. We love it..... haven't finished painting...but slowly getting the project done. Its the perfect house for us right now and we are so GRATEFUL for it. =)