We got a CAT

Our kids have wanted a cat since we started visiting the local pet stores in the last year. At first Sean and I said NO, NO, NO. It just won't ever happen. About 4 months ago I told Sean that I'd been softening my opinion and wouldn't actually mind one because the kids are so smitten by these cats we go visit. I loved the interactions they had with these cats and wanted that interaction in our home.......BUT, I told him that I would never pressure him into letting us get one. I was letting him know my opinion on the matter. If he ever changed his mind about NO CATS, I would be okay with getting a cat but it would have to be his decision because I didn't want the guilt trip for the following 14 years about the cat.

So we're standing at the pet store on Monday, Sean is watching the kids play with cats and he buckled. Oliver won him over and he told Dominic we could get a cat. So the next day, we came back and picked up Oliver. He's 2 and house trained already (phew..I don't think I could have done a kitten) and he's really really sweet. GREAT with kids and affectionate, but not overwhelmingly so.

Penny and Oliver absolutely adore eachother. She is all over him all day long and he doesn't just endure it, he likes it. He'll come up to her and nuzzle up against her or lick her, ready for more. She loves it and its fun to see them interact. See some of the videos to truly understand what I mean.

Dominic is just awestruck that he actually, finally has a pet of his own. He's been "waiting for this day his whole life." He cleaned out the cat litter without my telling him today. Love it! 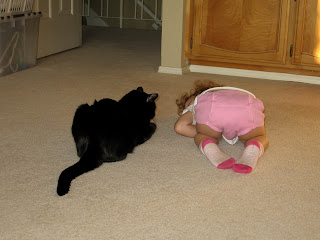 They were trying to catch his tail because he kept moving it left and right. Dominic is so happy to have a cat....its his favorite animal, so he says (a dog would not suffice). 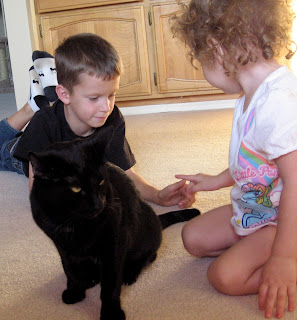 Penny's new boyfriend "All-love-her," as she says it. 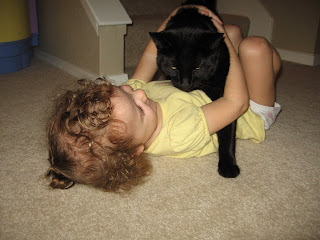 Taking Oliver Home. Don't mind the ALMOST birds and bees lecture or the WHOA'S from Penny as we rounded the long corner to get on the freeway (my eyes weren't on the camera at all, I was just holding it.

Playing with Oliver. He really likes this mouse, but he was kinda pooped by the time I got the camera out.

cute, we keep wanting to get a dog, but we won't, we are stronger than you guys

or you're less loving.... depends on how you look at it I guess. I jokes.

Love it! My kids were excited for you to get a cat so they can pet it! Fun videos. I need to ask you about that flip HD sometime. Need to Christmas shop for myself...

he is a pretty cat and very tolerant. looks like a good fit. achoo!

How fun! I am jealous. :) I grew up always having a cat, and I miss having one. James is super alergic so we couldn't ever get one.
Could Penny be any cuter? Seriously. I love her in the car, saying, "It's ok kitty, don't cry"

I can't stop laughing at the conversation you had with Dominic about "some" of the boy parts... haha. I love kiddos. I don't love cats but I love you guys so I'll let this slide... your kids are super cute with little Oliver.

I have wanted a cat but Kris is allergic (or so he says :) Penny is such a cutie. I loved how she was telling the kitty not to cry! Adorable!

Katie - I'm sorry we never got a photo of you guys! I tried to get one of you when you walked in, but it didn't happen for some reason! I'm so glad you came and that you're in MOMs club now so we can still see lots of you guys!

Super cute videos, Katie. The birds and the bees were going to get out sometime.
I also loved hearing Penny comforting the cat in the car. Too cute!