Dominic was supposed to have a friend stay the night on Friday but his friend got a bad cough. So, we got to have a "stay late" with his friend Nathan instead. They played, wrestled, ran around, played chutes and ladders and then watched "The Iron Giant" while eating popcorn. Penny likes to think she's just one of the boys whenever Dominic has friends over and Dominic is so good at just letting her in on whatever they are doing.

Penny has claimed this blue pillow. She has to sit on it everymorning when she drinks her milk and also whenever she is watching a show. She's so funny. 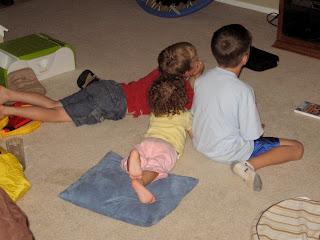 all 3 crazies. I love this photo. 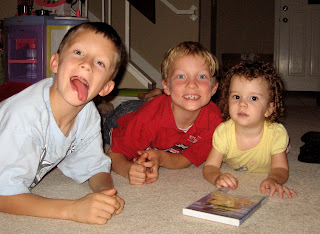 Then today we had Nathan's sister Addie over to play (she comes every Monday and we love it!). Penny looks forward to Addie coming over every week and they play really well together. Its good practice for Penny to not be bossy! =) 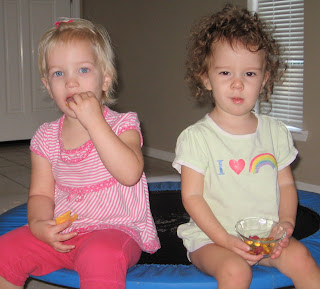 Eating their snack on the trampoline. Its where they both wanted to be. =) 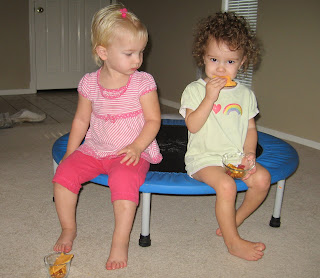 So fun! The kids both saw these and thought they were famous! They both had a great time- thanks for having them. Our turn next- and maybe you could go out on a date if we had them play over the same time!