I consulted my animal map but it does not indicate turtles in California. j/k. I put together this puzzle two days ago and upon completion (I thought Penny would be excited to see all the animals, really she was just excited to break it apart) I thought it would be a cool thing to put on the kids wall in their new room (red or light blue wall). So, I got out the modge podge and put it on a frame that I got for $5. Its a pretty big puzzle at 17" X 23" so the frame was a pretty good find. 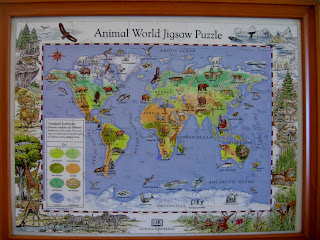 Anyways, about the turtle. We woke up this morning and found a turtle just right outside our backdoor. ITS HUGE! Dominic has been itching for a pet and this one might work! We shall see. It seems a little strange to have a wild turtle in our backyard as there is no real way for it to get to our backyard. There is a very steep hill behind us and a very steep hill in front. How'd you get here little turtle? 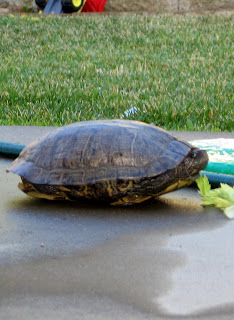 I put him in a box that I thought would be big enough, obviously its a little small. Pretty cool though eh? 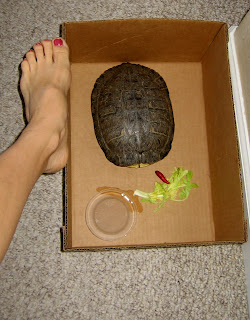 I Just called about it. Its a female slider turtle. Native to Northern California ponds and streams. Its egg laying season and she must have ventured off to lay her eggs and then got lost. She's a LONG way from a pond of any sort so she got pretty darn lost I would say.

We'll go release her into the Cameron Park Lake this evening where she'll be the happiest. I wish I knew where she laid those little turtle eggs.
Posted by Katie at 8:13 AM

that is a fun find. animals are cool.

cool! but be sure to wash your hands. turtles carry some bug that can make you sick...which is why they don't sell them in pet stores anymore.

Yes, I remember my 3rd grade teacher telling me that and so I've been washing my hands like crazy....and wearing garden gloves.

Turtles are cool. I found my pet turtle when I was little in a puddlein our cul-de-sac.