Sean's cousins go camping about 2.5 hours away from us the week before the 4th of July every year. Last week we decided to join them for some fun on the lake. We had a great time and enjoyed many many things in the outdoors. Our favorite thing was hanging out in the tent though right at bedtime. Our kids were so silly and it was nice to all be together.

Sean, Dominic and Stella on the taco. We wanted to take Penny, but she was beyond tired and cranky that she fell asleep in mommies lap. Dominic watching from the back of the boat after his ride. Sean wakeboarding. He looks so handome out there.=) There would have been pictures of me except, well....I never got up. It was my first time and I just wasn't getting it. I'll try again another time. It LOOKS so easy. 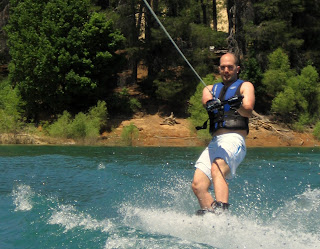 Sweepy Penny. A little traumatized about testing/trying to find a life jacket that would keep her afloat, she fell asleep in my arms. 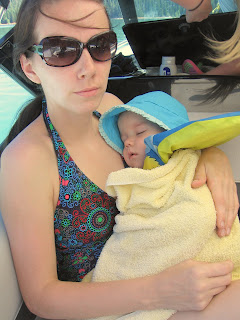 There were some water snakes that we could catch on one part of the lake where it made a small inlet. When the sun started to go down at night it was the perfect place for snakes and we caught a few during our 3 day stay there. Dominic was thrilled and wanted to bring one home but upon further discussion, decided that they would probably be happier in the lake and he put them back. We caught them several times. All the kids loved them. Penny squealed in delight. 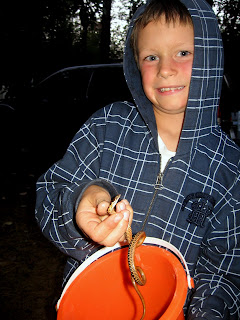 Penny liked the headlamp but it would blind everyone she looked at. =) 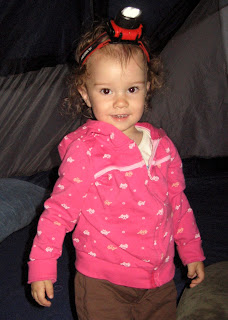 Sean told Dominic that he could roast and burn as many marshmallows as he wanted. He made quite a few for everyone to eat but just didn't want to be done. Burn away Dominic, burn away. I can't believe how big he is sometimes. Penny shoved about 3 marshmallows down that night. 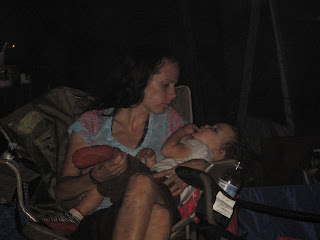 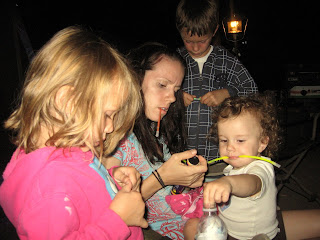 Getting crazy with the glowsticks 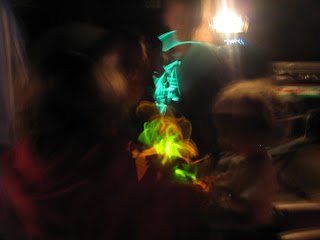 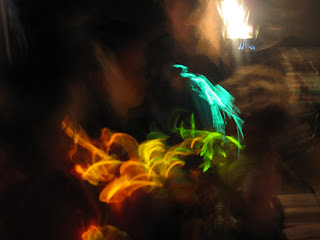 The concentration on her face is to die for. This is one of those wind-up flashlights. Penny is trying to push a buttong and not only sticking her tongue out to help her, but she is shaking because she's pushing so hard. 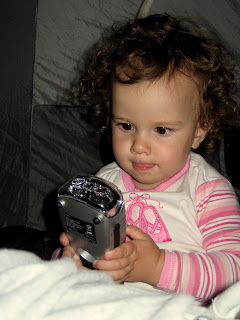 Daddy is getting a booger. This picture put Sean and I in a fit of laughter. 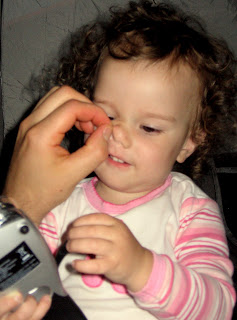 Dominic was super tired both nights and begged (part cuz he was tired, part because its such a novelty to sleep in a sleeping bag in a tent) to go to bed. Here he is mostly asleep and Sean is saying "Don't smile, don't smile." He's trying really hard not to smile. I love my boys. 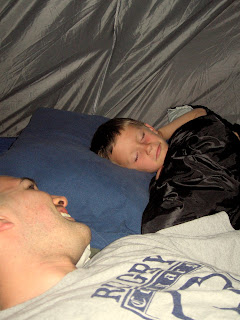 We had a great time camping and can't wait to go again!
Posted by Katie at 11:06 AM

Family camping is so much fun!

WOW! So much fun and a lot less painful then our 4th of July. You guys are being so adventurous this summer!