Sunday Dominic re-discovered legos. He goes through phases where he doesn't play with them and then will play with them for hours one day. He was making some pretty cool ships while we watched Extreme Makeover Home Edition (or as Dominic calls it, The Helping People Show). He was very proud of his creations as they were quite large. 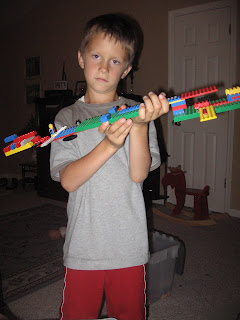 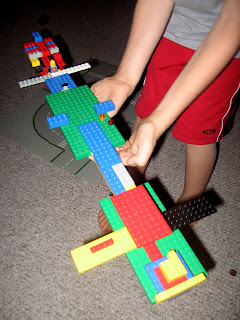 Getting busy digging for more parts. These are all Sean's childhood legos. I love watching Dominic's imagination go wild! 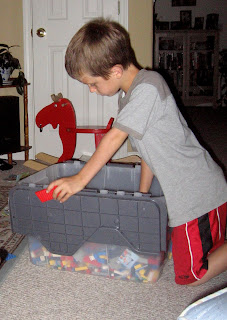 Meanwhile, Penny was busy putting her babies in time-out. "Yucy Time out, Baby time out. Say sorry." It was pretty cute. Lucy (or Yucy if you are Penny) is her pink baby, named after Lucy who came over last week to play and Penny designated this doll as Lucy's when she was here. After Lucy went home, Penny kept calling the baby Yucy and it has stuck. Her blue one was Dominic's when he was a baby and she just calls it Baby. She won't give it a name, we've tried.

Notice the purple cast, we got her pink cast wet and had to take her in to get it off and put on another one....oops! She insisted that we put another smiley face on it though. =) 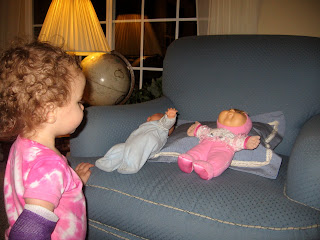 She was also walking around with a phone up to her ear saying "Eva, call me back" clear as could be. Eva (my sister) is her favorite person to call on the phone (besides her dad) and she asks to call her all the time and will say her name over and over and over until we get her on the phone. The conversations last about 15 seconds. If we end up leaving a message we hear "Eva call me back" like a broken record until she gets to talk to her.
Posted by Katie at 2:40 PM

I love Penny.. and our little phone conversations! I can't believe how big Dominic is, crazy how time flies! I'll leave a gift for him at Julia's so that it will be here when you guys come down, sad I won't be around. I'll send a postcard from Japan AND Thailand!

Dominic would have so much fun with my boys, they LOVE to build with legos and blocks. He is such a handsome kiddo. And Penny...she's just beautiful! Oh to have a girl!