Penny's pacifier (we call it a Plug) has been giving her a rash above her lip. Its annoying and because she's sucking on it often...it doesn't go away. On Saturday it was getting pretty bad and I decided that it was time to say goodbye to the Plug. I got scissors and snipped the ends off in front of Penny. I did them all....otherwise I know my weakness and would have after a few hours given her an un-cut one.

She put one in her mouth, said "broken....scissors....broke it" She tried them all hoping to find one that she could settle with to no avail. It was kindof sad but she wasn't upset. It was just very matter of fact. At naptime it took 1.5 hours to get her to sleep because she usually uses her plug to relax her. It took a lot of patience from her and I to get her to sleep, but she did it. Bedtime was a hyper nightmare....but after a good hour...she was calm enough to relax. Each night gets better.

This picture was night 2.....she still wanted to hold the plug even though she couldn't suck on it. Her face was nuzzled into my pillow and I couldn't see it until I took the pillow away....and found the plug in her mouth backwards. Desperate to try anything that may pacify.... she so stinking sweet. 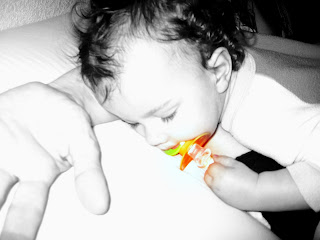 Yay! No more Plug! No more Panic! Other news is we brought the potty in from the garage and she has started to sit on it and pretend-play with it. Right now its just a toy with no pressure. But she is learning what happens on the potty. They grow up so fast......... I savor every stage.
Posted by Katie at 9:56 AM

Way to go! It only takes them about 3 days to adjust to changes like this. She'll be fine.

i hated plugs! the sooner i could get rid of them the better. mainly because they always got lost and then it became a panic to find it before the kid had a fit. good for penny. life can be rough!