My haircut cost me an arm

I am the worst mother (kidding, I know). I had a hair appointment yesterday and just before I left I was trying to get Penny down for a nap. She was having a hard time falling asleep but she was definitely tired. I finally just resorted to giving her a plug (I take it out of her crib before she wakes up so she doesn't even remember having it...this was the second time I did this since we've cut them up) and laying her in the pack-n-play to figure it out and fall asleep on her own. Usually when I do this it takes 2 minutes.... Well, I left her with Grandma and went to get my hair done. Apparently she was mad about it and tried to make an escape. Grandma said she heard a thud and then crying so she went in Penny's room and found her on the floor crying. She picked her up and rocked her to sleep in her chair in the living room. When I got home we played for a bit and then she said "owie, hand, owie". When I squeezed her wrist she yelped in pain and I knew she had broken something. Off to the doctor we went.

She wasn't in a lot of pain, just when she put weight on that wrist or if I squeezed it (or the doctor). She was still using her handWhen the doctor came in Penny said a cheerful, "Hi Vicky!" to which Vicky laughed out loud and said. "If I had a girl I would want Penny." I told her she wasn't for sale. =) She had a buckle fracture of the distal right ulna, non-displaced.

We went to another doctor and had it casted. She had pooped through her last diaper (it was a 6 hour ordeal from when we left the house to get casted) and so she was being casted quickly because going comando on a 17 month old doesn't last long without a mess. The Orthopedist was good about it and quickly got it done. Penny wanted a black cast but he convinced her to get a pink one. Thanks doc.

So, apart from the cost of my cut and color, my haircut also cost us an arm (but no legs!).

Oops...... I wub her...so much for our swimming plans in this hot weather! 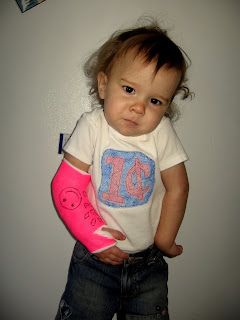 How sad. Hopefully she won't go AWOL(with 2 military BILs I had to spell it correctly) again out of the playpen. She is very cute - cast and all.

Poor Penny! I must say that picture is too cute... love that little girl, and love the cast!

Ohhhhhhhh, I just want to pick her up and squeeze her. What a little trooper!

ooh, so sorry! yesterday when i was at sam's club a kid fell out of the cart onto the hard concrete floor. she screamed for at least 10 minutes straight. i hope she took her to the ER also. you can't be too careful! poor baby penny. extra loves from gma hirt.

Poor Penny PooPoo!!! She looks cute in a cast though! You should hire the mad Lindsay Johnson art skills to make it amazing!! She's got lots of cast painting experience. How long does she have to wear it? It does put a damper on the swimming plans for sure- bummer. Give her hugs and kisses from us.

Just from a mom that has been through this - don't feel too guilty (easier said I know). We had a head injury with Hailey and a broken leg on Kaelin in the same day last year! So - I get the bad mom award! I know how you must feel - but she will be fine!!

She looks so pitiful, I printed out her picture and showed everyone at work, she sure is posing for the camera. My sweet little namesake, hope you feel better really soon and I am sure you will get tons of attention. I wish I could give you a big hug

that pic is so cute. poor little thing.

Oh, how sad. She does look darling in her picture though.

I love that the picture just says "well, what can ya do??" so cute. but sad. Sorry about her hand, but your hair looks awesome! ;) we missed you at the recipe party!