Last Saturday we did a quick (4 hour) stroll through the Sacramento Zoo. Sean had to work, but we went with a family that has a boy Dominic's age (Indy). Dominic and Indy were more interested in putting their little plastic key into all the information boxes so that it would play information than in seeing the animals it seemed, but it was still fun. We had a good time and we got to see lots of animals. It was such a nice day out that we even needed sunscreen!

Penny is giving me two thumbs up and saying cool....though it was hardly understandable since she had her PLUG in her mouth. She's completely weened (as of late last week) and has become a bit more dependent on the plug ever since. 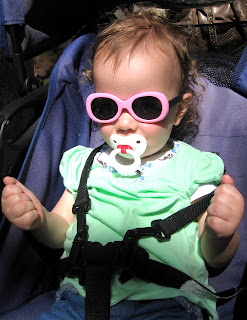 We took a picture of Dominic in this spider last year.......so it seemed appropriate. She thought it was really funny when I put my head through and she could see me as a spider. Darn...no pictures though. 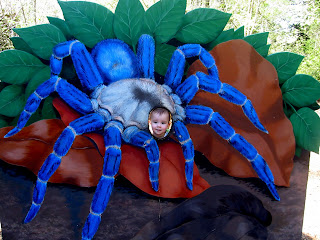 I think her biggest fascination was with these big fish. It was a large tank that you could see into and the fish were pretty big. Penny stood here for about 5 minutes just staring at them. 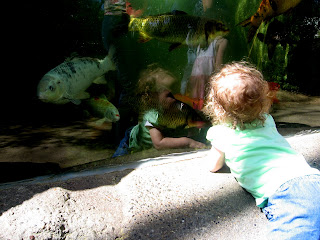 Indy and Dominic jumping around the zoo as kangaroo's. 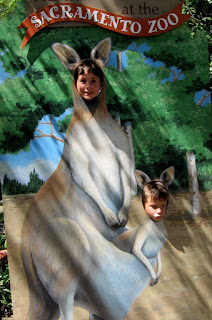 It started out with the Flamingo's...... they are very talented to stand on one skinny leg for so long. 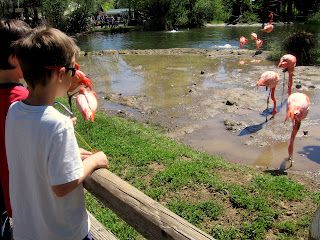 These chimpanzees were really funny. The one on the ground was chasing the one on the rope over a piece of watermelon. I think the trainers did it on purpose. They were swinging all over the place though the one trying to get away while eating it and the other just trying to get a bite. 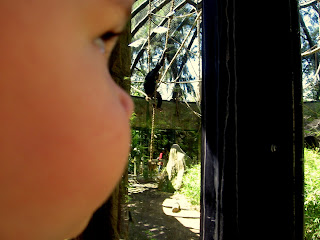 Dominic and Indy swinging in the ropes. 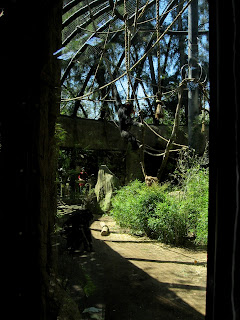 Funny how that pacifier works with weaning. Charlie is nursing less and never took a pacifier until this week. He's almost one. What a time to start a pacifier, huh?

SUPER CUTE photos. I think the one of Spider Penny looks like her face was cut out and pasted on there though! Funny. I miss going to a zoo- what a treat for you all.

Congrats about weening. :o) She's already sucked all the smarts out of you anyways so there is no point in continuing! HAHA!

Good job on the weaning... does this mean there may be good news soon...?(wink, wink.)