Okay, its about time I did a post for Dominic

Dominic's latest passion is BAKUGAN. If you have not heard of these you are totally out of the 6-12 year old loop. Get with it. These are similar to Pokemon. You play a card game with them, but they come with these ingenious little balls that pop open when you place them on the metal gate cards. The game is actually quite fun (what?!!...someone has to play with Dominic) and has helped Dominic learn to add really big numbers (like 340 +180 +60 +40= ?) He LOVES his Bakugan and consequently, so do all his friends.

Nathan came over and they played for about an hour and a half. When it was time for Nathan to go home Dominic said "What? Its only been like 5 minutes!" =) 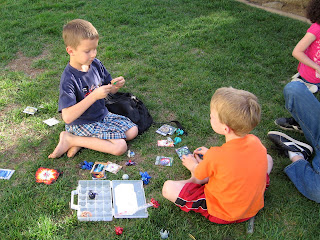 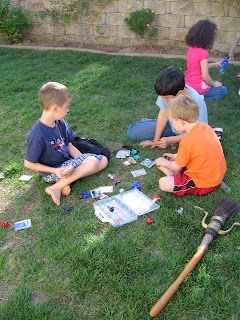 Spencer lives next door and they play quite often. He's a few years older, but so far....neither of them care. =) 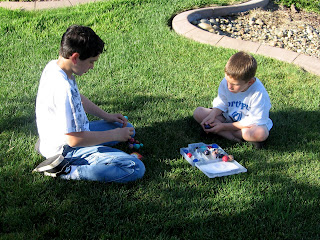 This is Dominic daily task chart. Yes, I pay him to do normal things everyday. It goes against everything I told myself I was GOING to do when I had children. But what did I know then right? This has kept the peace so well in our house. If he's being resistant to getting his daily tasks, I can refer to the chart instead of getting frustrated. The chart becomes the "bad guy" more or less. This also helps Dominic visualize what he needs to get done. He simply puts a magnet on the square when he's finished it and knows what he has left to do still. We've been doing this all year. For every 3 magnets at the end of the day, he gets a tally mark.....and for every 25 tally marks he gets $2.50. A quarter goes to tithing and a quarter goes into savings and he gets to spend the rest on whatever he pleases......but I don't buy his toys anymore so it really evens out what I was spending on him before anyways perhaps.....sshhhhhhhhhh, don't tell! And, he gets to learn about money this way. He's learned that buying a lunchable isn't a good investment of his money because he doesnt' really like them and once they have been eaten, they are gone. "Mom, you already buy me food so that would be a silly thing to spend my money on!" Yay! I don't have to be the luncheable Nazi! I've been really pleased with how this works. We lapsed on it because of Christmas break....I quickly realized that it was something that HE needed to keep him working towards a goal and also decreased the frustration in our home. Mid-January we started up again and oh what a relief that was!

The happily follow directions 3 times a day also allowed him to have a bad morning but start fresh again inthe afternoon if he chose to. We LOVE this chart. 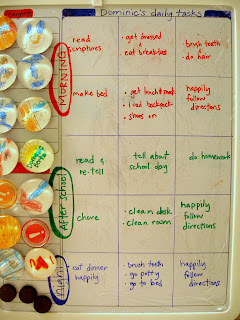 How it was made: Locker whiteboard about the size of a sheet of paper (around $3.00 at walmart). Designed the squares with permanent marker and covered the board with saran wrap to keep them from rubbing off with daily use. Magnets are glass rocks with a flat back. Use tacky glue and glue pictures onto the back of them with the pictures facing the magnets add a strong magent on the back and let them dry. You are READY TO GO!..... I've changed theh daily tasks one time since we started this chart in September. To to this, simply color over the permanent marker with a dry erase marker and then wipe off.

I also recommend that you put this somewhere where YOU end your day so you remember to put up the tally marks. Ours is on our bathroom counter. When I'm brushing my teeth and washing my face I wrap up his chart by putting the tally marks on the paper behind the task board and then re-setting the magnets.

This is nothing new for us, we've always done charts. Dominic does well with them and I discovered this when he was 2. Here is a list of charts that we've done:

Do you have a chart in your home for your kids?
Posted by Katie at 11:36 AM

We have had success with charts. I used one with Ashlee when she was about 3 years old to get her to stay in her bed at night and wake up dry- she was at 100% on both in about a week. Kids need that visual reminder and gratification. I am very impressed with your homemade chart, by the way.

Actually, you've inspired me. I think I'll try my hand at making one for my kids! I could especially use it for homeschooling. Thanks, Katie!

1. I do know about Bakugan. This is the first time I have seen it spelled, however.
2. Charts is a great idea.