I'm not sure if you have noticed yet, but I am a feast and famine blogger. I blog all the pictures I want about 2 times a month from my camera........ So, here is Valentines day and I'll catch you up over the next few days. =)

We got Grandma some roses from Costco for Valentines day. They stayed amazing for over a week! Penny's favorite thing to do was smell them and she would push our faces towards the roses so that we wouldn't miss the wonderful smell either. They really were the best smelling roses I've ever been around. Yuuummmmmmm..... Here she pulled a petal off and made Grandma smell it since she was too far away to push her head towards it. So thoughtful...ha! 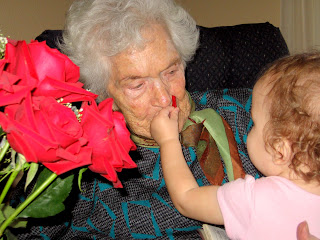 I asked Penny to say cheese, to which she SIGNED cheese. Thanks Signing Time! Daddy thought it was funny and I really like this picture. 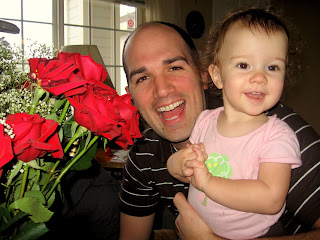 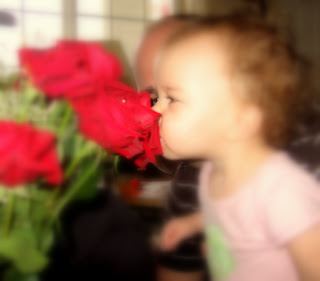 These were her valentines stuffed animals she got (one from us and one from Sean's mom). The fuzzy bear was one of two. Dominic got the tan one and she got the white one. The white ones eyes are a tad bit closer together giving it a more loving appeal and Dominic immediately noticed it because he wanted to trade Penny......BUT Penny would have nothing to do with the tan one. If I try to give it to her she will say no and get the white one. So....as a compromise, I trimmed the hair around Dominic's tan one to make it look more loving and less ragged......now he says it looks cute like Penny's. My kids are so funny about their stuffed animals.

In this picture Penny is actually saying cheese for the camera....... perhaps because her hands were busy? 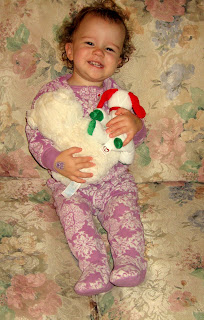 great family. i love them all.