At school they received an assignment to make a leprechaun trap to set out the night before St. Patricks Day. Dominic and I had a lot of fun with this one and ALMOST got one. Actually, according to the note that the leprechaun Olaf left.... he did get caught, but luckily (for him) a leprechaun friend was nearby and helped him out otherwise we surely would have had him! He left Dominic 2 quarters in place of the 2 pennies that Dominic put out.

Its a pot of gold at the end of the rainbow with a green rope for the leprechaun to climb up and slide into the pit of doom to his dismay that was NOT a pot of gold. It was a pretty creative trap I thought. 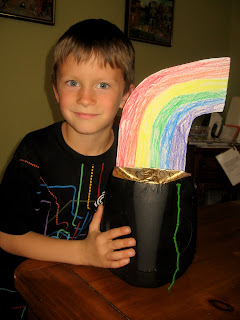 I like how Dominic started to write GOLD on each circle that he drew. He quickly decided that the leprechaun would know it is gold and he didn't need to write it on ALL of them. hee hee. 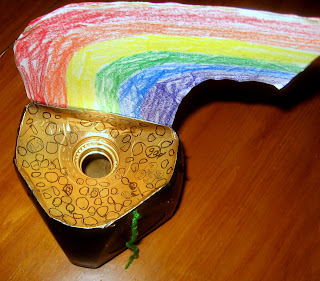 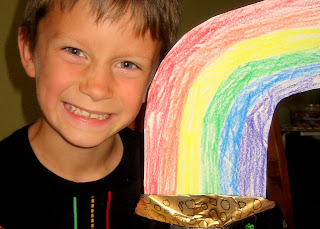 Super Cute trap! Did he think of it all himself?! That's a fun activity! :o) I love the gold circles- very cute.

Well, it was guided we'll say. I suggested the materials....and put a few ideas into his head but he made all the decisions. It was fun.

That is the cutest school project idea I have seen! Nicely done, Dominic.

i have never heard of trying to trap a leprechaun. great ideas, dominic! next year you might get one.

that is so cute. I love that idea.
but i have to say I hate this assignment. Having done it a few times now.

Hi Katie, you have won the give away on www.modestlychic.blogspot.com, please visit us for all the details.