Dominic and I made a volcano for fun. We took it out to the backyard to make it erupt. Dominic would have done this a million times....we did it 5 times only because I don't have a never-ending supply of baking soda and vinegar! 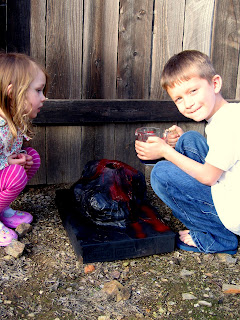 This clip on his belt is his new favorite toy. He likes to "sneak" (like I don't notice) up behind either Sean or I and clip himself to us through the belt loop. The other day Sean had on athletic shorts and Dominic kindly asked him, "Dad, could you go put on some pants that have THESE on them?" (referring to the belt loops). He's funny 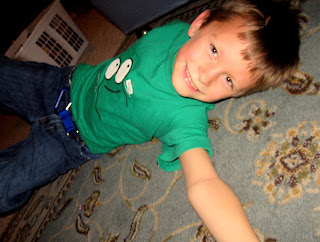 Penny loves bellybuttons and zurburts......she pokes and gives them freely. 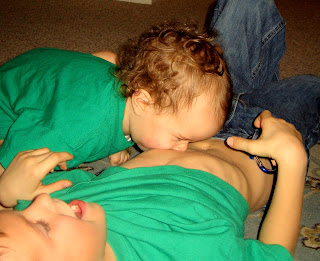 Penny also likes to sit on Dominic's head all the time (Dominic prefers it to be after her diaper change). They are both a giggling mess while she does it. Hopkins shirts from www.signingtime.com are the favorites around our house. It is the first shirt worn from clean laundry pile. 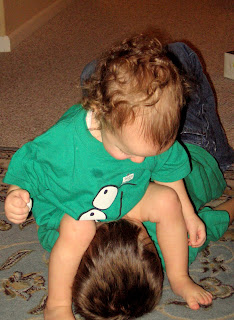 Dominic is the best big brother I could have ever asked for Penny. He plays with her so much, reads her books, shares his toys with her (she knows what a bakugan is because he loves to share them with her), feeds her, and someday I'll let him change diapers...hee hee.
Posted by Katie at 10:44 PM

Your kids are great! :o)

cutest kids ever. Love the volcano. My kids would LOVE that too.

I was going to say "great kids," but someone already stole that comment; )