Developed an old roll of film

Dominic will always be my little savior child. He was my sunshine on rainy days and got me through hard times. These pictures make me smile because although he was a stinker (poor guy was going through a lot of changes too) he was so stinking fun and could always bring a smile to my face. These are at our apartment when Dominic and I lived at BYU before Sean and I were married. Don't laugh at my dorky shoes...I always look back at my style 5 years previous and shake my head wondering WHAT WAS I THINKING! lol

He's right around 2 in these pictures....probably almost 2 1/2 based on long sleeve shirts and pants (its not summer).

He loved his clipboard, and my shoes! 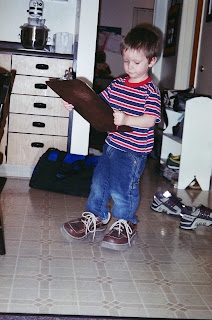 We gave this stethescope that I used to use at work to Gma Hirt(my mom for those of you who don't know) for nursing school this last year Dominic loved hearing his heart, though he's listening to the wrong side of his chest. We had lots of good times with 'old blue'. It had the softest ear pieces. The shirt was part of his costume I made for him for Halloween. He was Woody and threw a fit to wear it on Halloween day...but wore it almost every day thereafter until I couldn't squeeze it over his head anymore. 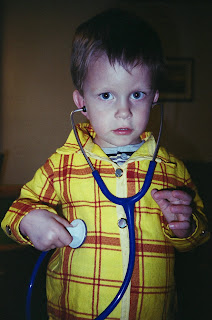 This was one of Dominic's favorite things to do and I loved watching him make a mess. I bought an end-roll of paper from the local newspaper office and we'd roll it out and make a mess. So fun. I can't wait till Penny is a little bit older to do the same...right now she would be trying to sneak her fingers in her mouth. 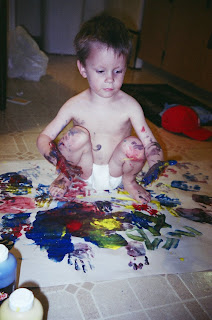 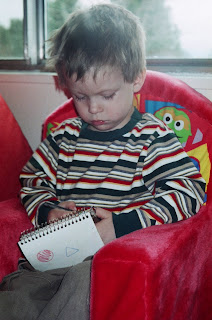 He looks exactly the same to me just bigger. What do you think?
Posted by Katie at 10:39 AM

What a cute kid he is. He seems like such a GREAT big brother. We have that Elmo chair too!

I recovered the chair a couple years later with neutral tones..... I hated having it in our livingroom (red furry elmo chair!...lol)

Hey Sean, This is Sarah Barnum Junsay! I hear we share lots of friends...the Ormsbys, the Foxes & do you remember Melissa Switzer? She was in our ward here too and knows you!!!
Your family is so cute! Robin said you are just a outgoing and friendly as ever!! Good times in the singles ward...good times!

He's got the cute busy face. I love the paint mess! :o)

HA... word verification is: herti. I thought it was funny.

Oh my goodness... I want to kiss on those chubby cheeks.

I always thought he was so big during the Wymount days. I now realize that it felt that way because I had a baby at that time, so Dominic was bigger. He's such a cute kid!

He seemed so big to me then too! I look back now and think...oh...he's so little!

What a fun treasure to find and develop the film! Those are cute pictures, it seems like just last year we were all in Wymount together :)

That is so fun that you developed and old film roll. He is so cute, and I think the blue clues obsession is so funny. Parker is crazy with it. He sings that letter song too, and he skidoos everywhere now. Everyone is always laughing at him. Funny that Dominic did the exact same things.

It's interesting. Knowing what I know now about 2 year olds, I am so impressed that you didn't go crazy as a single mom with a toddler. I should have been more supportive when we lived there, I was just so oblivious to how hard kids are! Oh, the things I have learned in the past 5 years.

Katie, those pictures brought back a lot of memories for me too. I loved how Hayden had Dominic and Ethan right there who were his exact same age...it was a huge blessing for all of us. You and Rebecca were the "fun" moms who let your kids play with rice and paint in the house - get outta here. Maybe that's why Hayden loved hanging out with at your places :)

Yeah, thanks for making me Relief Society Secretary in the midst of all that Cristin!....lol j/k You did give me a fabulous assistant secretary (love you Esther! you were a life saver!)

Good times. I was so blessed when I lived there that I have NO COMPLAINTS. Many many people helped me....including you and Eric (hello babysitting till 2am a couple times so I could go out)