Feeding the Ducks and Gooses

We got out on Sunday and fed the ducks and goose at Cameron Park Lake (about 1 mile from our house). Its nice because there is a path that goes around the lake and an island in the middle. You cross the bridge (on foot) to get to the island and thats where we fed the ducks. It was a beautiful day out and we had a great time. I gave Penny pieces of the bread to throw and at first she just shoved them in her mouth. Eventually I got her to take a nibble and throw the rest. Dominic threw huge chunks of bread to them or he would break off a bunch of little pieces at a time and then throw them all at once. He LOVES feeding the ducks but is still a little intimidate of the big goose (which...so was I! He was HUGE *replace H with a Y sound*). 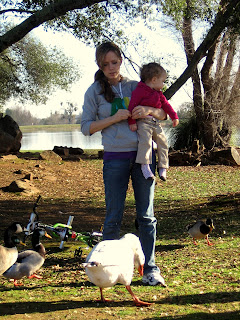 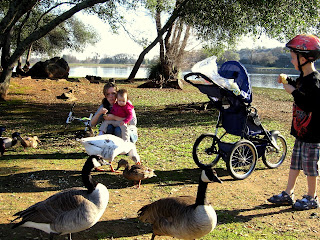 See how big he was? He was about to peck at my butt at one point, thats how tall he was (and how yummy my bum was I guess!) 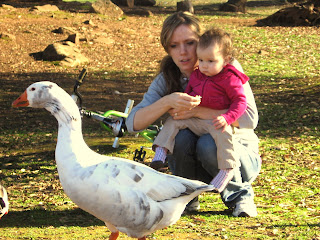 Dominic would throw bread to them as he backed away. He would make circles around us walking backwards. At one point he backed into the stroller and his back hit the plastic bag which freaked him out cuz he thought he backed into a duck. It was pretty funny. 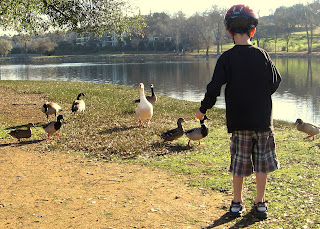 Have I ever mentioned how much I love California winters?

there are a LOT of birds there! that seems like a fun thing to do for an afternoon.