We had an interesting Thanksgiving and I have only a couple pictures to prove it. First, we spend Thanksgiving Day/Sean's birthday at home. We went over to his cousin's house for dinner and it was great to be around family. We're blessed in so many ways. Sean didn't want a cake for his birthday but brownies instead so I made brownies with chocolate chips and nuts on top, just the way he likes them. Friday he went to work and we picked him up at 4 and headed out to Vegas to see his family ONLY at about midnight his brother called and said they all had the flu and that we probably shouldnt' come. Hmmmmm........its a 10 hour drive and we were 45 minutes from Vegas. So, we got a hotel 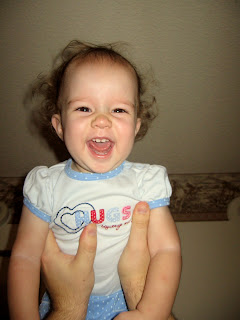 Picture 2: Dusty and Megan stopped by the hotel as we were leaving to say hello (wearing those masks you see the Asian's wear as not to make us sick) so we could meet Brody. Penny loves babies and she kept hugging her cousin. He's super cute and I'm sad I couldn't snuggle on him all weekend. Not sure Penny would have approved though anyways. She got pretty jeleous in the few minutes Sean and I held him. 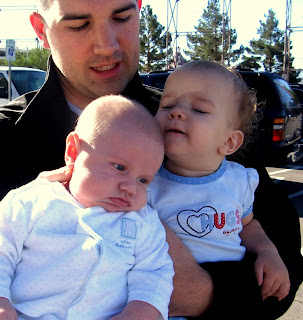 So, we went from Buffalo Bills Hotel outside of Vegas and headed to my sister Julia's house in Mission Viejo and stayed there for one night. I got to see Rose, and Nephi at Julie's house and Dominic disappeared into the cousins lair all day long. I didn't hear a peep from him at all. Here Penny is watching signing time so we could pack the car up. Its a healthy addiction....... 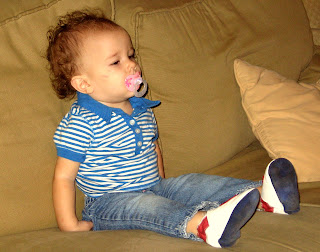 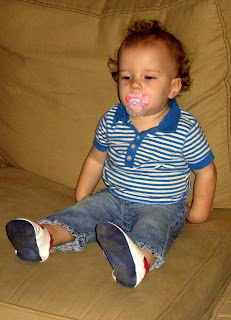 So Sunday morning we drove out to Eva's, had lunch and visited with her. Yummy leftovers squished between 2 slices of yummy bread and grilled on the panini press ( I don't know how to spell Panini and I don't care!) Then we hit the fun holiday traffic on the way home. The 6 hour drive took us 12 hours, longer than it took to drive to Vegas. It was a long weekend! But we are thankful we didn't get sick.......sad we didnt' get to see his family.

How was your Thanksgiving?
Posted by Sean at 1:15 AM

Sounds like you made Lemonade out of lemons with the whole Vegas trip...and mission vejo. Nothing like a road trip...
Penny's hair couldn't be any cuter! I LOVE LOVE LOVE it.

You had an eventful Thanksgiving didn't you. Luckily mine wasn't spent driving and driving. Just the 45 minutes it takes me to get to Utah County where my family lives.

Man, Katie, her hair is SO cute, I just had to say something about it. I love those curls.