Randoms from the Camera

Sean thought it would be funny to mark on Dominic's face before he woke up (I married a 5 year old I swear). Well, it was. Dominic woke up, went the the bathroom and I heard a "Heeeeeeey".......then he came in to my room and I asked him what was on his face to which he replied, "I know I just saw it there, I have no idea how it got there.......Daaaaaaddy I bet." But then he didn't wipe it off. It stayed ALL DAY. I kept calling him Jose and late in the day I asked if he knew why I was calling him Jose. He said no, I told him he looked like a Mexican with that mustache. He laughed, and then still didn't wipe it off.

The next day he thought it would be really funny to scare the beejeebers out of Dad while he was asleep. I told him that I didn't think that Dad would think it was very funny and I thought he should try something less drastic, like tickle his nose or feet or something. He swore that he thought it would be funny so I let him try. From the bedroom this is what I heard
"raaaaaaaaaaawwaaaaaar"

"Dominic, what are you doing, I'm trying to sleep

"Dominic, seriously, stop. I'm trying to sleep. What is going on? Mommy, what is Dominic doing yelling at me in my room! Dominic go away!"

I then asked Dominic to come to the living room. "Did he think it was funny Dominic?" To which he replied, "I don't think so." 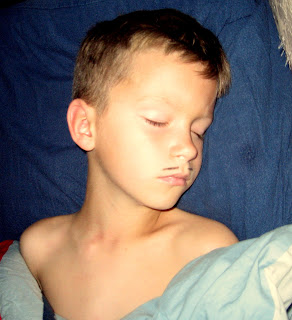 When Penny got her kitty, I had to find Dominic's puppies (thanks Aunt Jane!) They are the cutest cottonelle puppies and came with that little dog-house. Dominic re-fell in love with them. I like when I find things like this in his bed. He put them to bed. 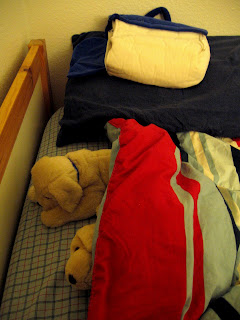 She's trying to climb on everything. 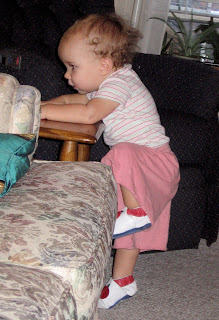 She loves Daddy's blue exercise shoes. She kept pointing to his shoes and then her shoes and saying "shooosh, shoosh" We let her try them on. 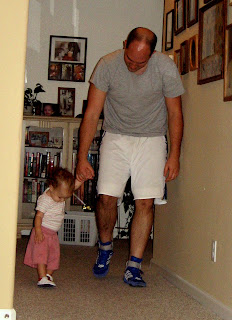 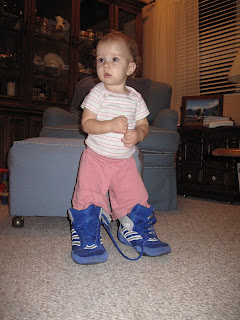 I love the teasing back and forth, unfortunatly I think all men are kids so there is no way out of it. Sorry

I love the picture of Penny climbing on the couch. Kaelin was a climber too! She would try to get on the dining room table, counters, anything! She still thinks its funny to climb on the coffee table and if I come over to make her get down- leap for the couch...scares me everytime!