Meeting the Challenges of Today

Below are excerpts from an amazing devotional given to BYU students in 1978. See the whole talk here. Recently, some members of the LDS faith have chosen to not take a stance on certain issues (proposition 8 is an example, but not the only example I'm sure) or have chosen a stance contrary to the first presidency . I think these are fitting words for them to read. The whole devotional is an amazing read. Print it, read it with a highlighter and discuss it with someone.

In my opinion, there are no fence sitters here, no grey area. You're either following the first presidency or you're not.

If you are ever wondering what the LDS Church's official stance on homosexuals in the church is, read this enlightening article also. 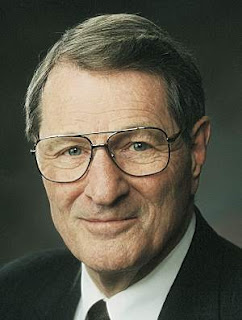 "Make no mistake about it, brothers and sisters, in the months and years ahead, events are likely to require each member to decide whether or not he will follow the First Presidency. Members will find it more difficult to halt longer between two opinions. President Marion G. Romney said, many years ago, that he had 'never hesitated to follow the counsel of the Authorities of the Church even though it crossed my social, professional or political life.'

"This is hard doctrine, but it is particularly vital doctrine in a society which is becoming more wicked. In short, brothers and sisters, not being ashamed of the gospel of Jesus Christ includes not being ashamed of the prophets of Jesus Christ. . . . Your discipleship may see the time when such religious convictions are discounted. . . . This new irreligious imperialism seeks to disallow certain opinions simply because those opinions grow out of religious convictions.

"Resistance to abortion will be seen as primitive. Concern over the institution of the family will be viewed as untrendy and unenlightened.... Before the ultimate victory of the forces of righteousness, some skirmishes will be lost. Even in these, however, let us leave a record so that the choices are clear, letting others do as they will in the face of prophetic counsel. There will also be times, happily, when a minor defeat seems probable, but others will step forward, having been rallied to rightness by what we do. We will know the joy, on occasion, of having awakened a slumbering majority of the decent people of all races and creeds which was, till then, unconscious
of itself. Jesus said that when the fig trees put forth their leaves, 'summer is nigh.' Thus warned that summer is upon us, let us not then complain of the heat."--- Elder Neal A. Maxwell

I believe this will be my last post about this issue for a time but both Sean and I feel that this experience has really helped us grow and help us be more committed to the Truth and to our beliefs. We hope it has done the same for you.
Posted by Katie at 10:08 PM

EXCELLENT words and very inspiring. Thanks for posting the link to this talk.

My friend also had that quote from Elder Maxwell on her site. Thanks for being so strong and brave and a good example. I think it's time that we all start realizing that NOW is the time to decide where we really stand -- whether or not we live in a place where this issue is staring us in the face.

read this story too!

actually an interview, not a story.

i'm glad that prop 8 passed. thanks to all who worked for it.

I find it interesting that the very people who demand tolerance and acceptance are dishing out intolerance and condemnation. That’s not the way to make friends in communities they seek acceptance from.

However, on the flipside, isn't it great that the interfaith coalition is supporting us and standing with us even when we're obviously the unpopular target?

Los Angeles interfaith leaders voiced their support for the LDS church this afternoon, saying: “The peaceful faiths, families, educators, activists, and community servants who make up the protect Marriage Coalition are saddened to hear of the continued targeted attacks on the Mormon people during and after the conclusion of this fair and certified election. Like many churches, the family is the anchor of the LDS faith and it is no surprise that its members in California joined other faiths in giving everything they had to Proposition 8.“