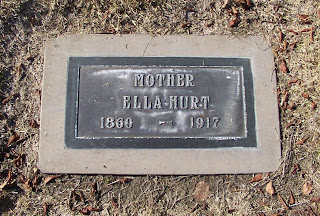 There is a whole plot of Hurts and they are all related TO ME (and some of you)! Here is my Great Great Grandmothers. Enjoy family! I got to hold a journal of hers this past summer while I was in Juneau and made copies of it. But here SHE is. I thought it was neat. Thanks Susan (she has a vast knowledge of this family that she married into.....the crazy Hurts...my line changed to Hirt by my Great Grandfather).

Tidbit: Fruza Ella Hurt married her cousin Isaac A Hurt (Ike) but they weren't really cousins. Ella's parents died (unknown how, possibly Cholera) and she was raised by her mom's sister Martha (Patsy...mom, can we start calling you Patsy?) who was married to Christopher Hurt. Christopher's brother Thomas had a son named Isaac. In her journal she refers to her cousin Ike and then ends up marrying him. She never mentions in her journal that it wasnt REALLY her cousin........note to self, don't assume your family generations below you will know things just because you know! I only found out after tons and tons of research because I was stuck at who Isaac's mom was. Martha Hurt was not HIS mom on the 1930 census, it was Ella's.....pseudo-mom (Aunt actually) who she considered her mom as well. So there you have it. Lots more information to come to you at Christmas! Ella and Isaac had a son named Hubert Hurt (changed his name to Hirt reason unknown but it is speculated to be a typo in the Army that he didn't want to do the paperwork to fix). Hubert had a son named Dale, Dale had a son name Mike, Mike had a daughter named Katie. (me!)

They have changed the song to "Family History I am doing it..." --- just thought you should know! Get with the times man!

HOLY cow though!! Great job on the researching! You're awesome. And I thought geneology was just for old people. :o) Very neato bandito!

Tell you what, when you do family history you can sing the song however you want......till then, we sing it my way. Ha! I like how it sounds better the old way though.....

I know I've never actually met you (I'm an old friend of your hubbies) but you must have grown up with Brite Music! Love that geneology song! I'm very interested in doing my own geneology and it's always an inspiration to read stories like yours. Thanks!